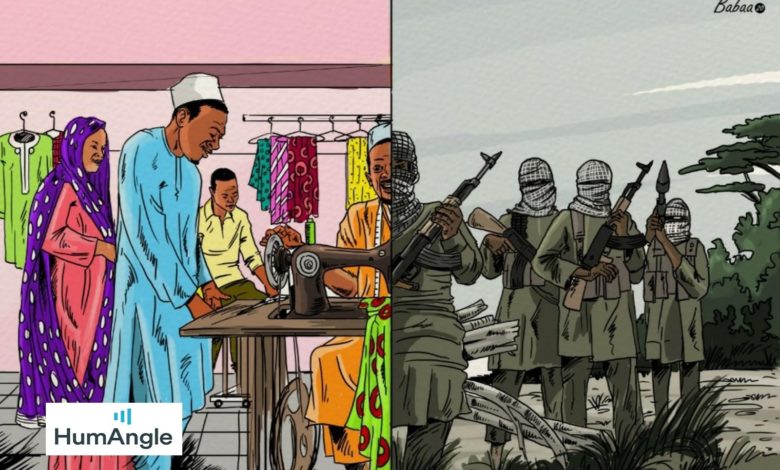 In a three months-long investigation, HumAngle traced former members of the terror group to different cities across the country, where some of them who still share radical beliefs are embedded.

He was in the senior commanding cadre among the revered elite jihadist corps in the Islamist terrorist group, Boko Haram. As a Qa’id, the Nigeria Army equivalent of a Brigadier-General, he was high in the sect’s pecking order. Two years ago, Musa, (not his real name) took residence in Hayin Rigasa in Kaduna among ordinary people.

Musa was joined by his family, his wife and three children. He lived discreetly, with a keen interest in the minutest information about his neighbours and the neighbourhood. He avoided conversations with people and only ventured out when it was necessary.

He had a medical issue. HumAngle was informed that Musa frequently treated piles but his stubborn refusal to submit himself for professional medical attention and prescription, plus the absence of any medical records stocked whispering campaigns that matter could very well be much more serious. Some even hinted at the possibility of HIV.

A few months ago, Musa gave up the ghost at the peak of the scourge of the coronavirus pandemic. Without any known friends or relations that his widow could run to, she took her children and returned to Maiduguri to join her family. Musa was among the numerous ex-Boko Haram fighters who have made some of Nigeria’s major cities their homes since 2016.  Unconfirmed figures believe their number could be well over 3000.

Musa’s family, as well as of his wife, had any idea of their whereabouts for years.  A member of the family told HumAngle: “After the death of her husband, she had nowhere else to go, so she returned home to us in Maiduguri. That was when we knew they were no longer in the Lake Chad precinct but were living in Kaduna for over two years.”

HumAngle tracked 15 ex-fighters of Boko Haram who have deserted the battlefronts and have taken up residence in major cities in parts of northern Nigeria. Their neighbours and colleagues at work know nothing about their violent past. Security agencies seem to have no clues about the trend either.

Our investigations show that as many as 3,000 Boko Haram ex-fighters have been living in major cities across northern Nigeria undetected between 2016 and 2020. They work to eke out a living as daily paid labourers in Abuja, Kano, Kaduna and other major cities in northern Nigeria.

Many among them also work as taxi drivers, domestic workers in people’s homes, wheelbarrow pushers in markets and motor parks, traders, and security guards for individuals and organisations.

One of such ex-fighters that we tracked is Aliyu (not his real name) who created for himself a new life in one of the slum neighbourhoods in Kaduna. He moved into Kaduna three years ago and started a modest tailoring business. He soon attracted many clients to his shop.

Aliyu drew praise from his clients, impressed that he delivers their work on time showing skill and diligence. In no time, he started a relationship with one of his clients, and it resulted in a marriage that was consummated in Kaduna on Friday, September 11. Aliyu had always contemplated a more sedentary life, now in excitement of being married to someone from Kaduna state, he reasoned that this has been finally resolved,  giving him the liberty to claim the state as his state of origin, overcoming undue official scrutiny.